Museum of American Finance | The Fed at 100 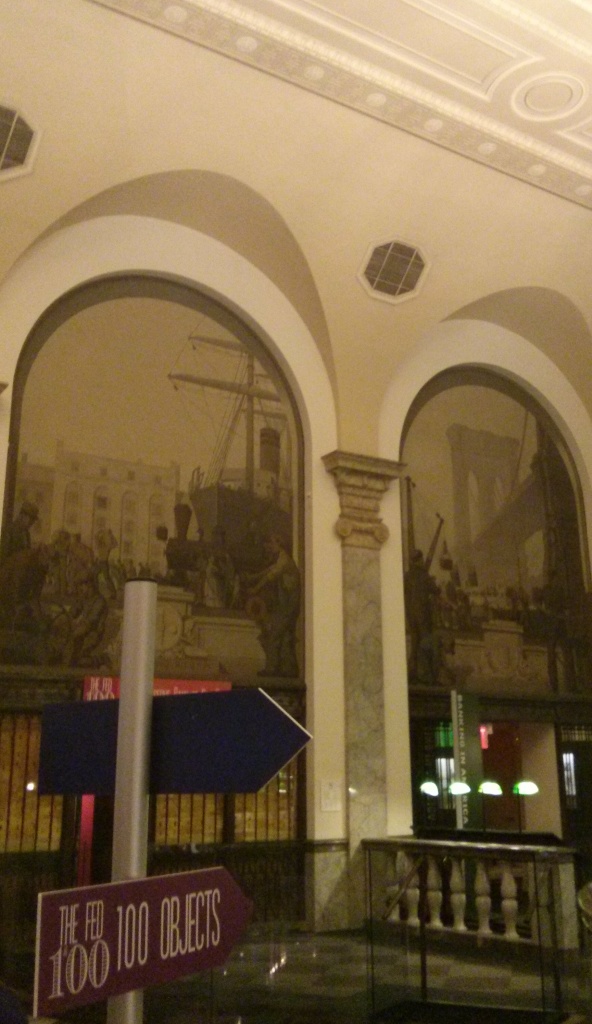 This week I visited the MoAF, and it got me thinking about how it is a different type of museum. Other museums I’ve visited also have a primarily education mission, but here very few of the objects it displays are picked for their esthetic value or even their value as curiosities (they don’t have the Hudson School paintings or the Audubons of the New-York Historical Society) nor are they the interactive recreations of the physical world of a science museum. Finance is in many ways an abstract concept, about systems rather than things, so it seemed to me that while some items on display may have historical value, all of the items in the museum were there as symbolic representations of something of interest — from the portraits historical leaders to the paper stock certificates, and even the historical currency.

This was even more true of the exhibition, The Fed at 100, where the history is relatively recent. I thought they did a brilliant job of making this interesting by concentrating on tangible everyday objects. One exhibit recreated the desk of the Federal Reserve Chair, a Reserve Bank President, a Senator (who oversees the Fed) and of a research assistant. By showing the minutiae of what might be on their desk, and literally allowing us to sit in their chair the exhibit makes the abstractions tangible.

The 100 Years 100 Objects exhibit (in the same vein as the exhibit at the Historical Society that I wrote about before) tries to incorporate the everyday as well as the quirky, to move beyond the symbolic. Objects included a foot protector for workers who handle gold bricks and copies of “Soap Opera Digest” (in the 1970’s there were apparently lots of slow times when fed workers watched soaps). One of the things that caught my fancy was the wooden piece of a 2×4 addressed and mailed to Chairman Paul Volker, one of hundreds sent as a protest of high interest rates in the 1970’s by the construction industry. It seemed like lobbyist imitating mail art!

I’m looking forward to visiting the Museum of Math, another educational museum about abstract concepts, but ones that lend themselves more, perhaps to graphical representation. 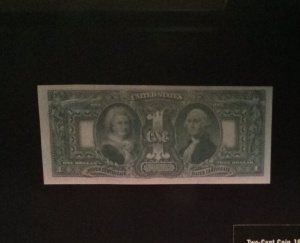 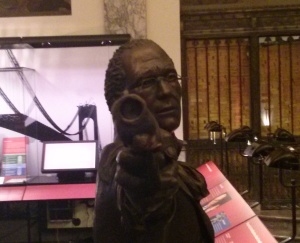 Raymond Burr about to shoot “financial founding father” Alexander Hamilton, the first US Secretary of the Treasury.

Tech Bonus
My visit to the museum was part of a special after hours private tour for a group called #DrinkingAboutMuseums, so unfortunately, most of the interactives were turned off for the night. However, I was able to interact with the “100 Years 100 Objects” exhibit, where items are only labeled with small numbers, piquing visitors’ curiosity and pushing them to call a number on their cell phone and punch in an object’s number to hear both what the object is and what its historical importance is to the Fed. For many objects, their significance could hardly be guessed without calling in.

While the technology isn’t cutting edge (it’s the same technology used in audio tours for many years) the teasing use of it here pulled the user in, forcing them to engage and rewarding them in some cases with first person oral history sound bites.