This small exhibit was intriguing — it took the concept of the historical museum, which illustrates history with objects, and blew it up, by starting with the objects and telling the whole history of New York. The exhibition is based on a book by New York Times urban affairs correspondent Sam Roberts. The exhibit only has a couple dozen or so objects from the museum’s collection out of the full 101 in the book.

It is quite amazing to span from arrow heads to wooden sewer pipes to subway tokens to graffiti all in one small room. Some of the objects are facsimiles (like the bagel and the black-and-white cookie). 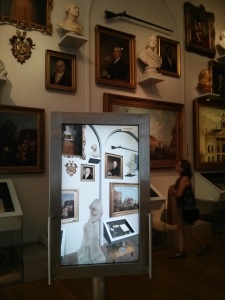 In the lobby of the museum are some fantastic augmented reality kiosks on the Federal Wall. These 46 inch touch screens designed by “Small Design Firm” allow users to get information about the items on the wall. The Kiosks pivot horizontally to select which part of the wall you are interested in.