Queens Museum | Bringing the World into the World

This show’s overarching theme covered several exhibits relating conceptually to the New York City panorama and to the World’s Fairs at this site.Some of my favorite pieces played with the idea of scaling things down, like the panorama. Chris Burden’s Scale Model of the Solar System, which starts with a model of the sun over the panorama, but which by necessity expands into galleries across the museum and beyond — Pluto is almost a mile away (the piece is from 1981, before Pluto was downgraded to dwarf planet). Powers of Ten, the classic film by Charles and Ray Eames is also on display.

There is also an exhibit about Andy Warhol’s Ten Most Wanted Men, originally displayed at the World’s Fair, but which was covered with silver paint to appease the shocked public (could this be where Andy’s fascination with silver, in his pillows and his tin-foil covered Factory came from). 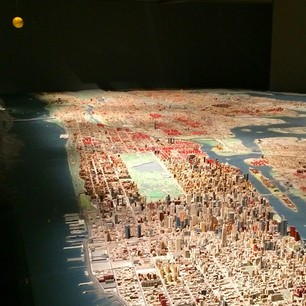