One of the joys of art is that it allows us to see things with fresh eyes, and that is certainly the case with folk artists such as Willem van Genk. Whether it’s due their unique vision is due to a lack of training or something else that prevents them from organizing images in the conventions of our culture, I find this unusual way of seeing the world very appealing. The artist was diagnosed as both autistic and schizophrenic, and it is not a stretch to say that he looked at things differently than we do, but in his case this difference caused him to create great art.

The 2 dimensional pieces in this show are distinctive because not only are the compositions unconventional – but the narratives they tell are also non-linear.  Willem van Genk traveled around the world and his pictures combine scenes from different countries, with text in different languages.

I think my favorite pieces were the models of trolleys. The rectilinear shapes have been twisted in a way that reminds us of cubism on the one hand and some type of crash on the other. And the artist’s unusual relationship with scale comes into play — rather than scaling down the advertisements to match the scale of the trains, he cut out logos from packaging that somehow are at the right scale for the model. He cut up a toothpaste box, cheese packages, even aluminum Coke cans to collage logos onto his trains. 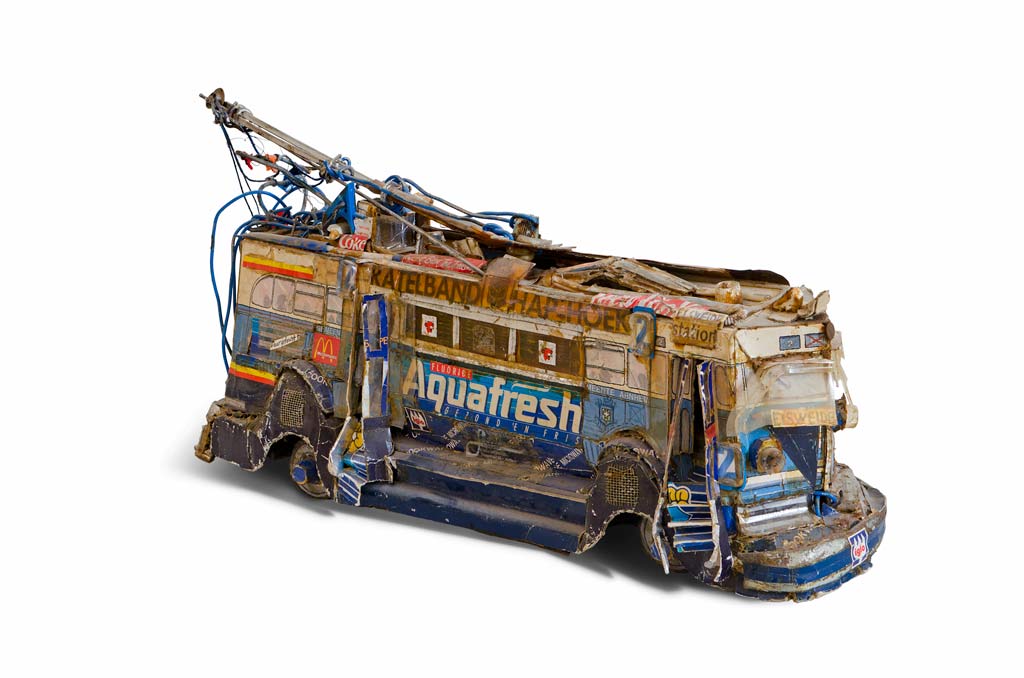 While there is no special technology in this exhibit, while you are at Lincoln Center check out “Solar Reserve” by John Gerrard on Lincoln Plaza. It’s a 28’x 24′ LED wall with a 3d animation of a solar farm, created using a video game engine. The lighting in the simulation tracks the actual movement of the sun, taking 24 hours to go from sunrise to sunrise, and the “virtual camera” changes point of view from ground level to an arial view every hour. While the scene is recreating an actual location in New Mexico, at many points it seems abstract.

Click here to cancel reply.
National Museum of the American Indian in New York | For a Love of His People: The Photography of Horace Poolaw
Nasher Sculpture Center | Provocations: The Architecture and Design of Heatherwick Studio