We were in Detroit on vacation, so we couldn’t miss going to see Diego Rivera and Frida Kahlo in Detroit. I don’t remember ever seeing a show quite like this one — a large “behind the scenes” temporary exhibit describing the making of a masterpiece in a museum’s permanent collection. But then, again Diego Rivera’s Detroit Industry murals are unusual, in that few works of art are made specifically for a museum.

The exhibit starts out telling about Diego Rivera and Frida Kahlo “Before Detroit”. This is a background explaining who they were, their respective levels of fame, and about their relationship, all illustrated through their artwork. This section also has biographical info about Frida’s trolley car accident, which profoundly impacted both her life and her artwork. 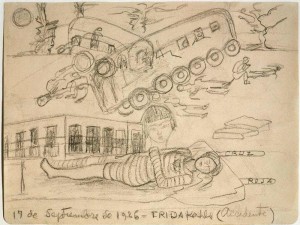 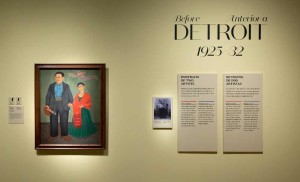 Frida and Diego Rivera, 1931 by Frida Kahlo
Courtesy of the Detroit Institute of Arts

The next section is the core of the exhibit, “In Detroit”. It consists of preparatory work that Diego did for the murals, as well as works that Frida was doing while in Detroit. There are some beautiful “cartoons” or full size sketches for the murals that are particularly impressive. The exhibit uses this part of the show to point out important details of the murals and also to explain how the trip to Detroit was important in the lives and careers of both of these artists. It was in Detroit that Frida had the miscarriage that both influenced the fertility imagery in Diego’s Detroit murals and was the turning point when Frida took herself seriously as an artist. 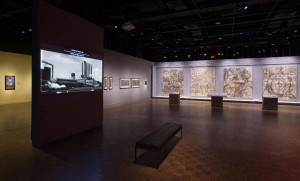 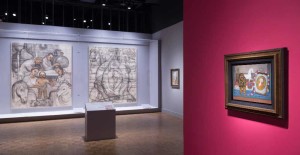 The final section “After Detroit” explains, again through their artwork, what happened to them after their visit — Frida’s longing to go home, Diego’s commission and subsequent fight with David Rockefeller Sr., their return to Mexico and their eventual separation and remarriage. 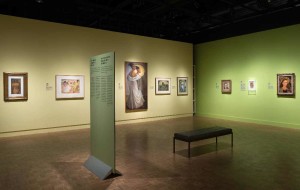 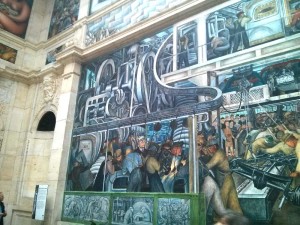 All this was wonderful preparation, of course, for our visit to the Diego Rivera Court of the DIA to see the murals themselves in their permanent exhibition. They were breathtaking, and I appreciated them all the more, after learning so much.

Tech Bonus
Since this exhibit had a very strong educational and narrative intention, and was not just displaying artworks, the museum encouraged visitors to get an audio guide, and about half of the visitors took them up on the offer. The guide also included recordings specifically for children visiting the exhibit.