Every year, while on vacation in Rangeley, Maine, we go to the Logging Festival on the grounds of the Maine Forestry Museum (until recently, named The Rangely Lakes Region Logging Museum). The museum itself never seems to change from year to year, so I don’t always go in. But this year I took a peek during the festival, and I was surprised to discover this delightful new exhibit of wooden dioramas. 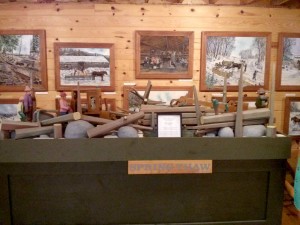 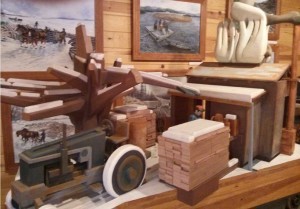 The dioramas are quite large, about 3′ wide by 8′ long by 5′ high. Each one consists of a scene mounted on an artist-made base on wheels. Many of the scenes are inspired by David Barten’s visits to the Rangeley Lakes during his youth in the 1950s and 1960’s.

Clear Cut or Spring Thaw shows cross-country skiers coming across a field where all the trees were cut and left in a chaotic state, as the logger leaves the scene. “Spring Snow” depicts a saw mill covered with snow. The scenes are all made out of pine with oil paint washes — I like the white painted wood for the snow in the trees and for the smoke. Representing delicate snow and smoke as blocks of wood seemed comical. 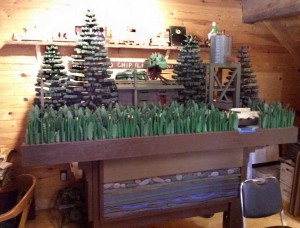 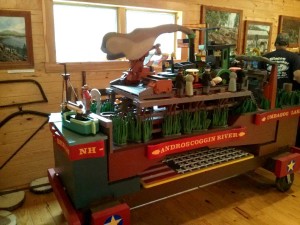 Aquifer represents a bucolic scene, with a boy sitting on the water tower for the old narrow-guage railroad, overlooking the pine trees and cat-tails by a spring. Built into the base is the aquifer proper, below layers of glacial rock. 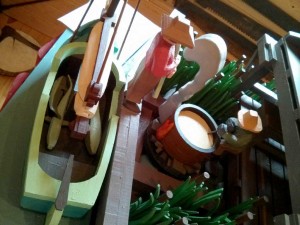 Tow is a scene from 19th scenery fantasy, where the artist imagined a scene with a new steam-powered tow, that would pull rafts of logs through the lakes to the mills. There are ladies with parasols, and men with big straw hats. An American flag, (built in wood, of course) lies on a shelf under the scene, representing the pride of American innovation. At one end of the scene, a fisherman with a sailboat is offering a fish to someone stirring a large vat of what may be chowder.

I was very impressed by this exhibit at a small regional museum. You never know what treasure you will find in a museum, even one that you know well.