Museum of Biblical Art | Sculpture in the Age of Donatello

This it the first time I’ve visited a small, niche museum and seen art of this caliber. This exhibit, Sculpture in the Age of Donatello — Renaissance Masterpieces from Florence Cathedral consists of artwork on loan from the Museo dell’Opera del Duomo (the Museum of the Duomo or Cathedral in Florence), which is currently closed for renovations. It is showing exclusively at the Museum of Biblical Art, and it may well be the only time these works are ever shown in the United States. The art is all from the first half of the 15th Century during the period of transition from Gothic to Early Renaissance. The show includes the work of Donatello, as well as other great sculptors of his time who contributed to the Duomo. 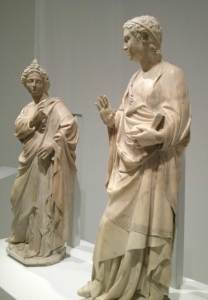 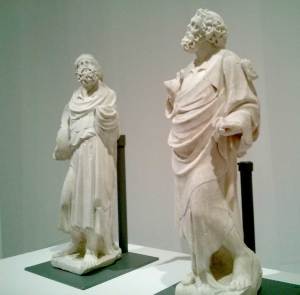 The exhibit is set up chronologically to illustrate the evolution of Florentine art over time — both in works by the same artist, as well as by artists of different generations. The twisting figures, both in two statues of the Annunciation, and in the prophets shown above have a Late Gothic feel. Later works, such as the St. John and St. Luke by Donatello and Nanni have more classical influences typical of the renaissance. These two sculptures were made as part of a competition to see who would get to create the final Evangelist, pushing both artists to their limits. The St. John is considered one of Donatello’s masterpieces. 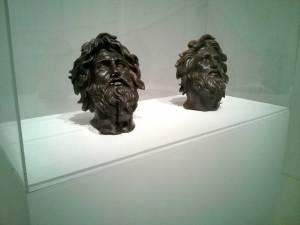 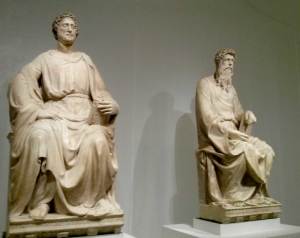 My favorite items in the show were neither by Donatello nor were they sculpture. Rather they were wooden architectural models of the dome and the lantern that crowns it. The later was likely used to win a competition to build the lantern, and both were used both for the designer to figure out how to build the elements of the dome as well as to be used as 3-dimensional plans for workers to follow. It is said that certain details were deliberately left out of these models, so only the master would know them. These models were covered with wax putty and polychrome to recreate the ornamentation, but that was lost after a flood in Florence in 1966. 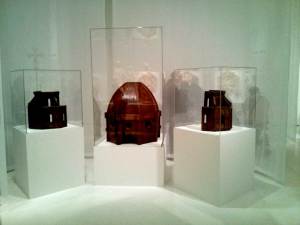 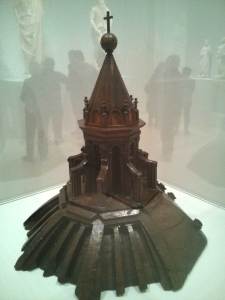 Model for Lantern on top of the Dome, by Brunelleschi 15th or 16th Century

As you enter the museum there was a room with a video projection of a virtual fly-through of a 3D computer model of the Duomo and of the not-yet-finished newly renovated museum. While the model is fully covered with appropriate “skins” of the inside and outside of the building, cracks were left at vertices so that, rather than the illusion of a solid building, it feels like a skeleton where the inside and outside are simultaneously revealed.