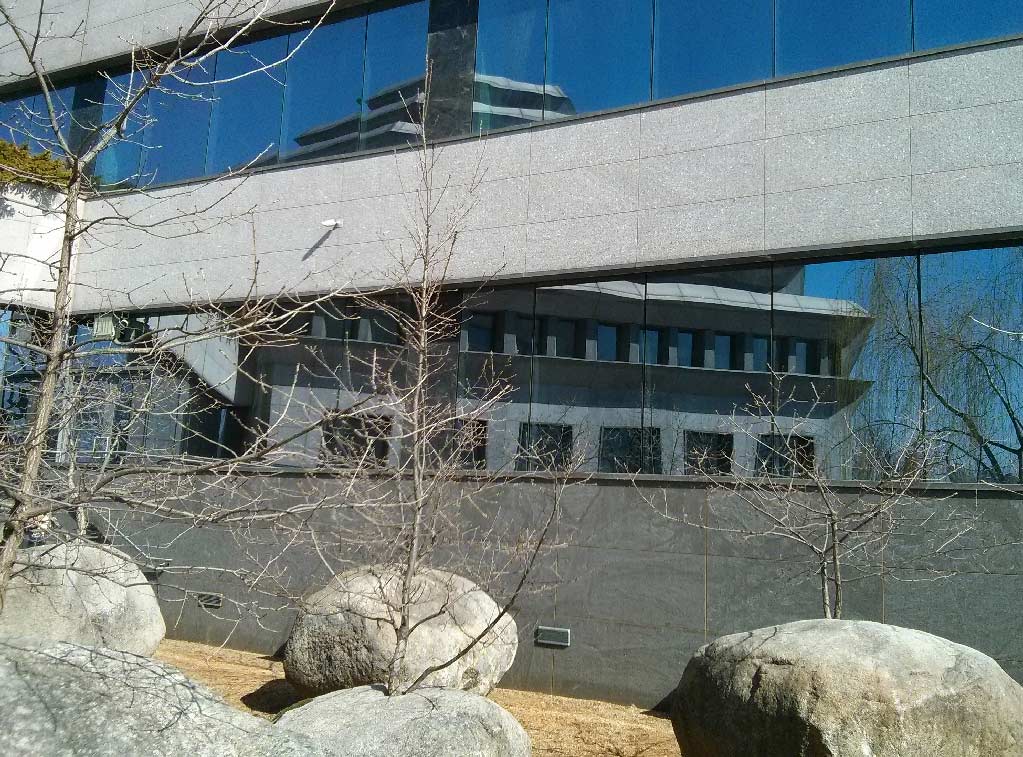 This past Sunday was such a sunny day  I didn’t want to spend it inside a museum, but then I remembered this outdoor permanent installation I’ve been meaning to visit for years. Andy Goldsworthy had done the seemingly impossible — making trees grow out of the middle of boulders — as a metaphor for the survival and thriving of the Jewish people after the Holocaust.

The piece consists of 18 boulders hollowed out and filled with dirt, with a Dwarf Oak tree growing out of a small opening at the top of each one. Goldsworthy said he chose the granite stones because they “have had a long and, at times, violent past.” The stones, created by fire within the earth, traveled up to the surface where glaciers dragged them across the land, wearing them down. Centuries ago, farmers moved them to make room for their fields. Goldsworthy used a torch to melt the stone and create the hollow centers, recreating their fiery beginnings. In 2003, assisted by Holocaust survivors and their families, Goldsworthy planted a sapling into each of the boulders. They have been growing for 12 years and could live for over a hundred more. Eventually the trunks will grow bigger than the holes, and the trees will meld with the rocks.

He picked 18 for the number of rocks and trees, because of its numerological significance: 18 is represented by the letter Chai in Hebrew, which is also the word life, as in the toast “l’chaim” (to life). This piece is about fragility and tenacity of life, and about permanence and impermanence.

At first glance I was disappointed that, while the day was warm and bright, the trees were still in winter mode for my visit, looking dead and not showing the contrast between the rocks and the plants. However, on further inspection, I saw that that branches were covered with buds, which had its own symbolic significance. 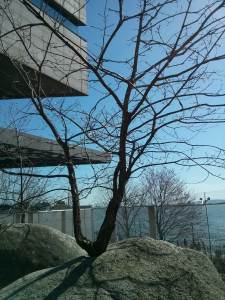 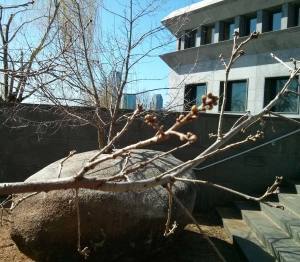 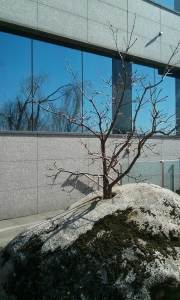 Tech Bonus
The museum has added an interactive called “Timekeeper” from Potion Design, to complement this exhibit. A camera in the garden takes 700 images a day, and a kiosk is set up overlooking the garden. Here, visitors are invited to use a dial to interact with a timeline, seeing the changes the garden has gone through as the seasons change and the trees have grown. The timeline goes all the way back to show “behind the scenes” footage of Goldsworthy’s process in making this piece.

Click here to cancel reply.
China Institue Gallery | Mao’s Golden Mangoes and the Cultural Revolution
The Rubin Museum of Art | Becoming Another: the Power of Masks