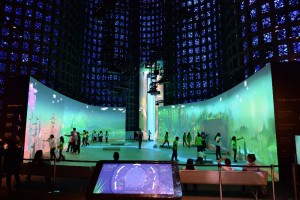 The Great Hall of NYSCI (the New York Hall of Science in Queens) is a unique space of New York City, like the Guggenheim’s spiral ramp or Grand Central Terminal’s Main Concourse. Created for the New York World’s Fair in 1964, its undulating walls are made of 5000 pannels, each with their own stained glass. So I was excited to learn that the Great Hall had been renovated and was transformed into a 21st century interactive experience. The exhibit teaches children about ecology, cause and effect, as well as about unintended consequences. This year, the New York Hall of Science is celebrating 50 years as a museum, and Doug Moore, whom I did some programming for at NYSCI, suggested that I make this my 50th and final post.

Unlike most science exhibits, the exhibit does not teach us directly about our world — it shows a fantasy world with its own rules. Point at a spot on the wall and a seed pod appears. Continue pointing and it becomes a bigger pod. Drop your hand and the pod is planted, and becomes a flower, a tree, or shoots of bamboo. Now the plant needs to be tended to make sure it gets enough water. 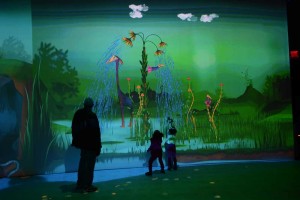 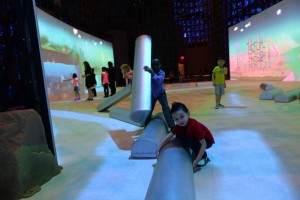 Large bolsters or “logs” can be pushed around the floor of the space to divert water from a waterfall to different parts of the room. Also, some slugs plug outlets from a reservoir of water. You can use gestures to cajole these slugs to move, allowing water to trickle out of the reservoir until they climb back into their spot as a living stopper. But the total amount of water in the exhibit is fixed, so when you move the water to make one area thrive, you have to take it away from another. If multiple environments are healthy, creatures will move between them, dropping seeds which germinate. 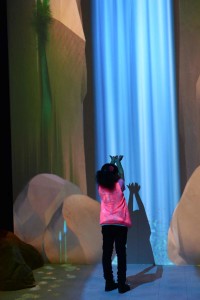 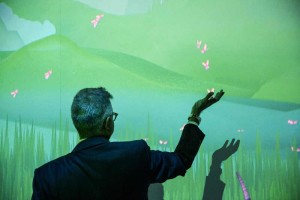 Different areas of the hall represent different biomes: desert, mountain valley, plains, reservoir, jungle and wetlands, each with its own plants and animals, but with one shared water supply. Children learn core concepts of sustainability science including feedback loops, equilibrium in a dynamic environment, and casual links and influences, while playing in this giant, immersive Dr. Seuss-like video game. Design I/O, the designers of this exhibit, understand that play is key to learning for young people. And because the environment reacts immediately to the children’s actions, they learn in ways that are different from in the real world, where the ecological consequences of actions may be days, weeks or years away. 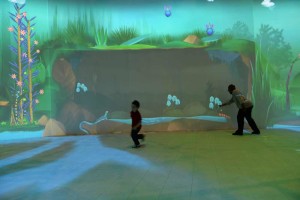 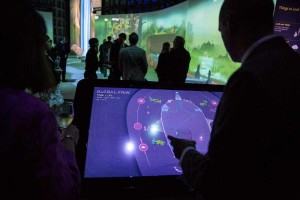 The entire exhibit is built with 15 projectors, 8 Mac Pros running openFrameworks and 12 Kinects, hanging in the middle of the space. The floor tracking uses 3 infra-red cameras that can “see” the logs covered with reflective fabric. In addition, there is a station in the back that summarizes the state of the 8 environments with stats on how many plants are living and dead, how many creatures are in play and how the water is balanced.