Noguchi Museum | The Museum of Stones 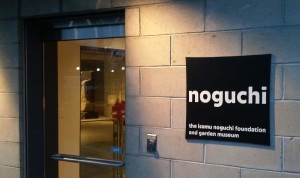 This was a unique opportunity for my blog: a museum exhibit that titles itself as a museum. The Noguchi Museum was started in 1985 and is the first museum in the US created by a living artist to exhibit his work. Thirty years later, this full museum exhibit combines Noguchi’s sculpture from the permanent collection with artwork from contemporary artists whose work, like Noguchi’s, involves stones, as well as some very old Asian art with some of the same themes.

The curator distinguishes rock, a natural material, from stone, a rock that has been put to some use by humans. Noguchi was interested at the juncture between these two, as are many of the artists. One gallery is devoted to ancient Chinese and Japanese “scholar’s rocks” and paintings of rocks. These objects, on loan from the Metropolitan Museum of Art, are rocks in that they are from nature and are not tools or tooled by humans, but by putting them into an esthetic context they in some way become stones, much as everyday objects become art when displayed as ready-mades. 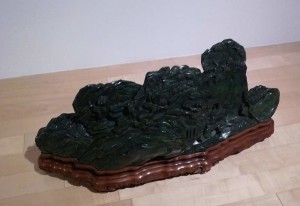 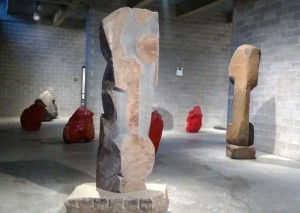 The first gallery I entered was full of Noguchi’s sculptures, but it also contained a series of sculptures by Bosco Sodi, consisting of large volcanic rocks that were covered with bright red ceramic glaze. In keeping with Noguchi’s wishes there are no wall tags in the museum, so it is up to me, the visitor, with the assistance of a pamphlet listing the works on display to determine which pieces are part of the permanent collection of Noguchi sculptures, and to identify the other works. In many cases this is not hard (the bight red, for instance is not at all like Noguchi’s work) but it somehow made me more aware of how I look at art and what is it that helps me to identify these pieces. 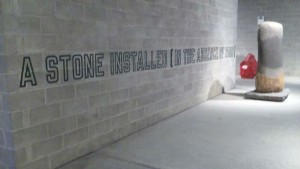 A STONE INSTALLED (IN THE ABSENCE OF WIND)
Lawrence Wiener 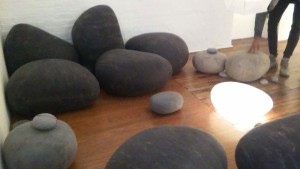 Many of the works in the exhibit refer to, but are not made of stone. There is a conceptual text piece by Lawrence Wiener with the words “A STONE INSTALLED (IN THE ABSENCE OF WIND)” painted on the gallery wall. There are felt stones, plastic lamps in the form of stones, ceramic stones.

In other cases the stones were there not as sculptures but as objects in part of a conceptual piece — there was a case of Tom Sachs’ Mars Rocks and another of his Moon Rocks (they are not are not actually from space). Stephanie Syjuco work was a collection of pieces of stone and rubble that she found across the world that look like they could be pieces of the rubble from the Berlin wall. 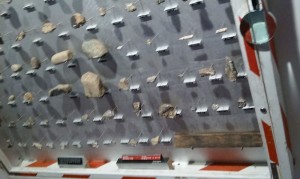 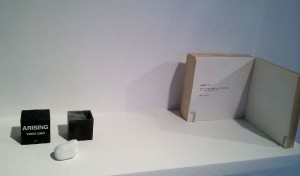 The show included a piece called “Throwing Piece in Grapefruit” by Yoko Ono, which includes the book “Grapefruit” opened to a page with the instructions “Throw a stone into the sky high enough so it will not come back.” Another piece, by Stephen Lichty, consisted of a Basalt obelisk and a dead taxidermy cat. It was interesting to learn that while Naguchi was influenced by the sculptural abstraction of his teacher Brancusi, he was also profoundly influenced by Duchamps and by Yoko Ono, so I believe he would have appreciated the somewhat humorous contemporary art in the exhibit.