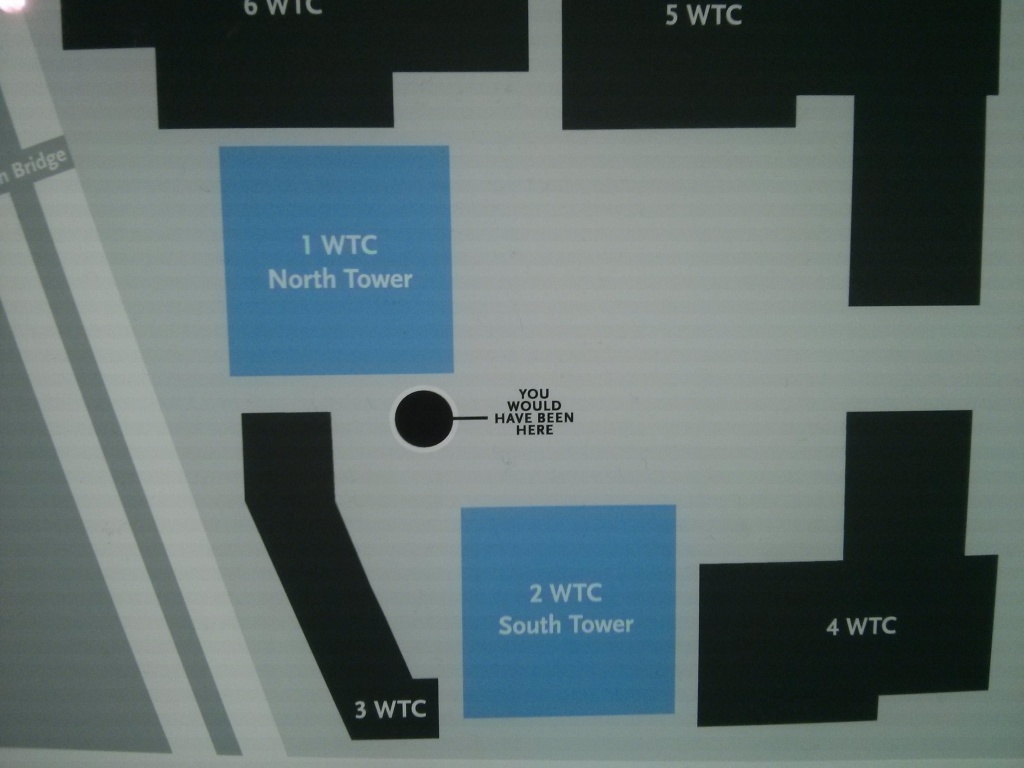 As I entered the museum, I immediately started choking up, and I knew that this would affect me in a way I’ve never been affected by any museums I’d visited before.  There were tissue dispensers installed at particularly intense spots in the exhibits. I didn’t need any, but only because I had brought my own.

The World Trade Center had been part of my life — I worked briefly in an office near the top of one tower,  I had brought visiting friends to the observation deck, I even met friends at the Windows on the World for drinks and dancing for my birthday. Whenever I was disoriented in the city, I would look for the towers. While I did not lose anyone close to me that day, I feel I lost a part of my city.

In order to respect these different modalities there are separate exhibits, each with their own tone. Fortunately the museum is vast – while it has a small footprint above ground,  it occupies the entire 8 acres below the Memorial Plaza, or about 1/2 of the original WTC plaza. I was there for 3 hours, until the museum closed.

Also, the museum needs to function for several different types of audiences:

While it may never be possible to please everyone, each of these constituencies is addressed in the thoughtful layout of the exhibits. 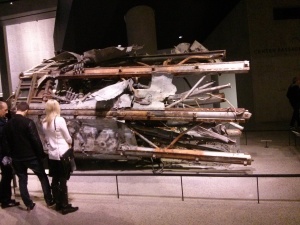 Twisted remains of part of the North Tower Antenna. 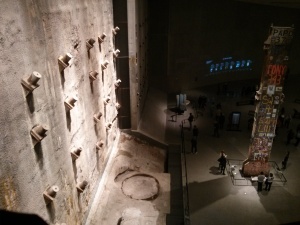 Foundation Hall and the Slurry Wall (aka the “bathtub”)

One highlight of the exhibits for me was Foundation Hall. Here you are standing inside the original foundation walls of  the WTC. In this hall  are the remains of things I remember about the buildings from before the event — there is even one intact original thick window pane.  Objects tell a story here, much like in A History of New York in 101 Objects or in The Fed at 100, which I’ve previously blogged about. I also appreciated the audio, which somehow felt less familiar and more immediate than the photos and videos.

I found myself watching over and over a 20 second video clip from the Today Show right after the first plane hit — this  was where I first heard that something bad was going on at the World Trade Center. The collected bits of debris and the photos of the ash covered streets reminded me of my experience seeing the wasteland of lower Manhattan that week. Revisiting this was an emotionally wrenching experience for me, and I can only imagine what it would be like to visit for people who lost loved ones or who were at Ground Zero that day.

Interactive touchscreens and audio wand in the Memorial Exhibition 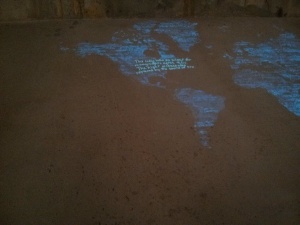 Messages of Remembrance Wall with my wife’s message

There are several very effective interactives, designed by Local Projects. In the Memorial Exhibition, you can search a list of  all the fallen by several criteria, display a photo and a brief bio, and hear a recording of their name. Then you can honor that person by queuing up  their entry to be projected on a large screen in an inner chamber for other visitors to hear and see. Another interactive allows you to write out a message which is then projected on a map, based on where you are from. While these are simple interactions, they allow the visitor to participate and contribute their experiences, either of 9/11 or of the museum, and to express some of the emotion that visitors are bound to feel.