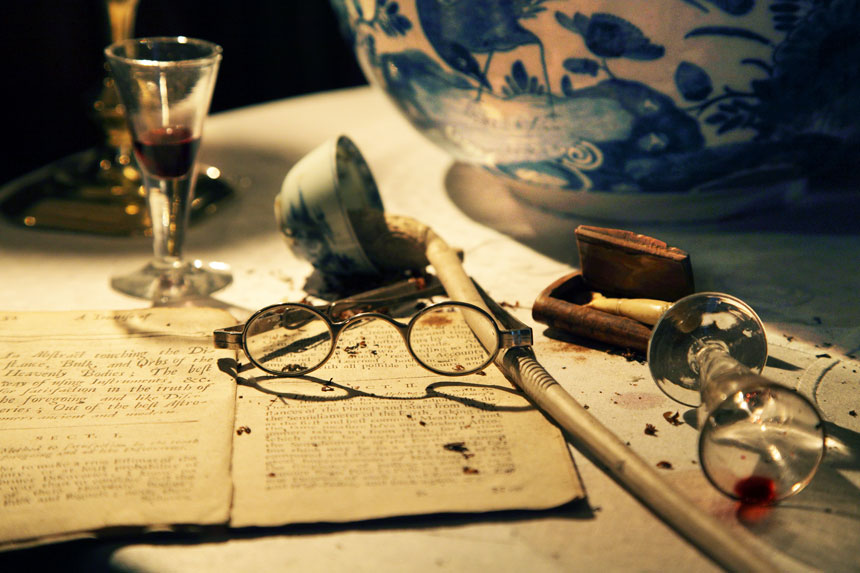 Dennis Severs called this house in East London a “still-life drama”. He meticulously furnished each room to tell the story of a family of silk-weavers from 1724 through 1914, and set it up as if you are entering a lived in space which the inhabitants had left minutes before.

This is not a house museum, it is an experience. There are no velvet ropes, you wander into each candle lit room, as if a guest in the house. All of your senses are called into play. You hear horse hooves, you feel the stairs creak and smell the burning coal in the fireplaces and the fresh food, half eaten, in the dining room. Everything is bathed in the cloves and perfumes that were used to cover the stench of old London. One visitor reported smelling that the chamber pot in one bed room had been recently used. But above all, your imagination is put into play.

All cameras and phones must be put away and visitors are asked to remain silent as they explore the house. The goal is not to be educational like the Geffrye Museum, but to create an authentic, immersive experience. Like the Geffrey, the rooms have been decorated for the Christmas season. 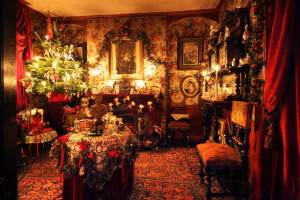 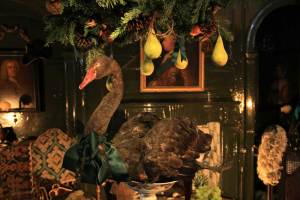 The men’s Smoking Room has been left in a mess by its drunken inhabitants, with glasses and bottles knocked over, and  tobacco for the clay pipes, strewn in a pile. The victorian parlor is much more orderly, as it has been set up for a Christmas tea. Upstairs, the beds are unmade, and clothes and wigs are left hanging in the master bedroom.  The top floor is from the most recent era. The family has lost its wealth as the silk business dried up, and they are forced to take in lodgers. Here the plaster ceiling is crumbling, the chair upholstery is ripped, and there is little ornamentation beyond a Christmas paper chain convincing you that you are in Dickens’s London. 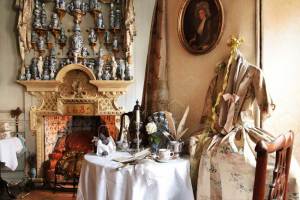 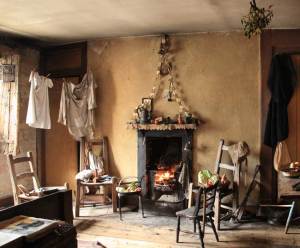 Dennis Severs, a Californian expat, bought this old building in Spittlefields in the 1979  pulled out the electricity and furnished it with flea market finds. He lived in the house in various bedrooms until he died in 1999, but his tradition of inviting visitors to tour it has lived on.

This museum banned all modern technology. By eliminating  the distancing effect of  cameras and phones, we have nothing to do but  look closely and use our imagination, committing the best bits to our memory.

Click here to cancel reply.
Geffrye Museum of the Home |Christmas Past
The Brooklyn Museum | Connecting Cultures: A World in Brooklyn