Museum of the City of New York | Stairwell B 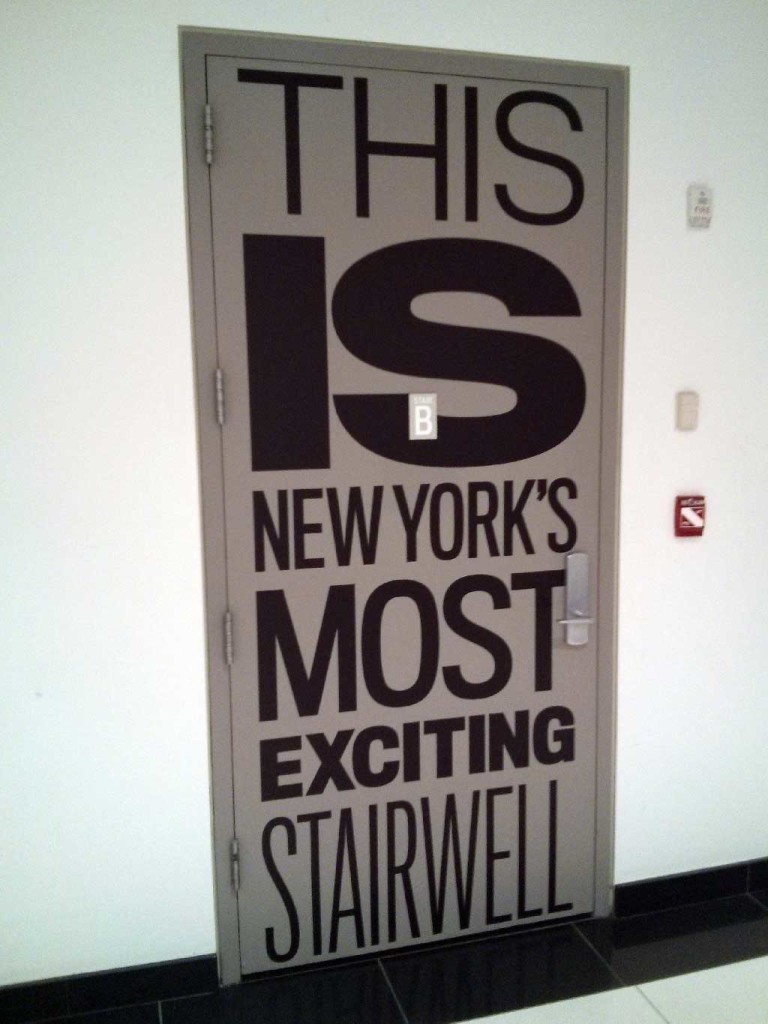 I had come to the Museum of the City of New York to see two exhibits: EVERYTHING IS DESIGN: The Work of Paul Rand and SAVING PLACE: 50 Years of New York City Landmarks (both very impressive shows). But on my way out of the basement bathroom, I came upon a door that said THIS IS NEW YORK’S MOST EXCITING STAIRWELL, and I was hooked.

There are many interesting stairwells in New York — I’ve always loved the Charles Simond’s “Dwellings”, a site-specific piece in the old Madison Ave Whitney building, with it’s matching artwork in the bank across the street. The MAD Museum has very nice signage in their stairwells about what exhibit is where. Once, I spent an afternoon with the Met Media Lab creating a mobile phone tour of all of the beautiful historic stairs in the Met (some were part of the original building, others part of their collection). The Museum of the City of New York itself just put Starlight, a gorgeous installation of over 10k LEDs in the grand spiral staircase. So what would be so exciting behind this door?

Well, I was not disappointed. What is essentially a fire stairwell had been turned into an experience as loud as the city itself. Every inch of the stairwell was covered by huge black and white photographs and quotes about New York in white text on black walls The quotes are writings by famous New Yorkers from Thomas Jefferson to Woody Allen (I had never thought of Jefferson as a New Yorker, but he lived here when it was the nation’s capital when he was the first Secretary of State). 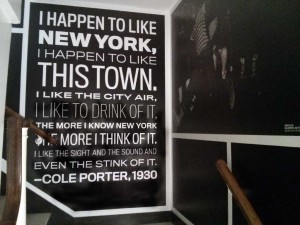 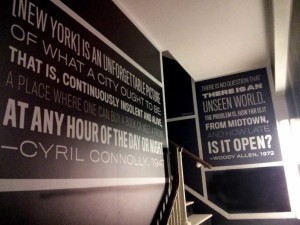 The stairwell installation was designed by Michael Bierut of Pentagram. While all of the text is in all caps and in the Titling Gothic font, every line is set in a different weight and size (bold, condensed, etc.). This makes it feel both chaotic and consistent. The quotes themselves are brash, like the city. Some hail the city’s praise, while others complain loudly about it. 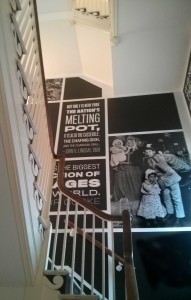 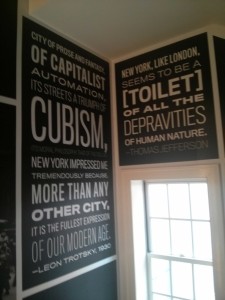 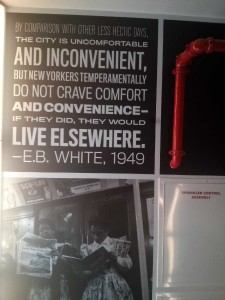 Tech Bonus
There is no tech involved in this installation. The only tech in the stairwell is for fire safety (smoke detectors, exit signs) which break the black-and-white consistency of the installation. While it would be possible to create a website or an app with these quotes and images, websites all have text and images, so it would not have the impact of discovering this unexpectedly in the stairwell. Of course, one of the genius parts of this, it that it entices museum visitors to use this back stairwell, rather than waiting for the single elevator, and helps with the flow of the museum.